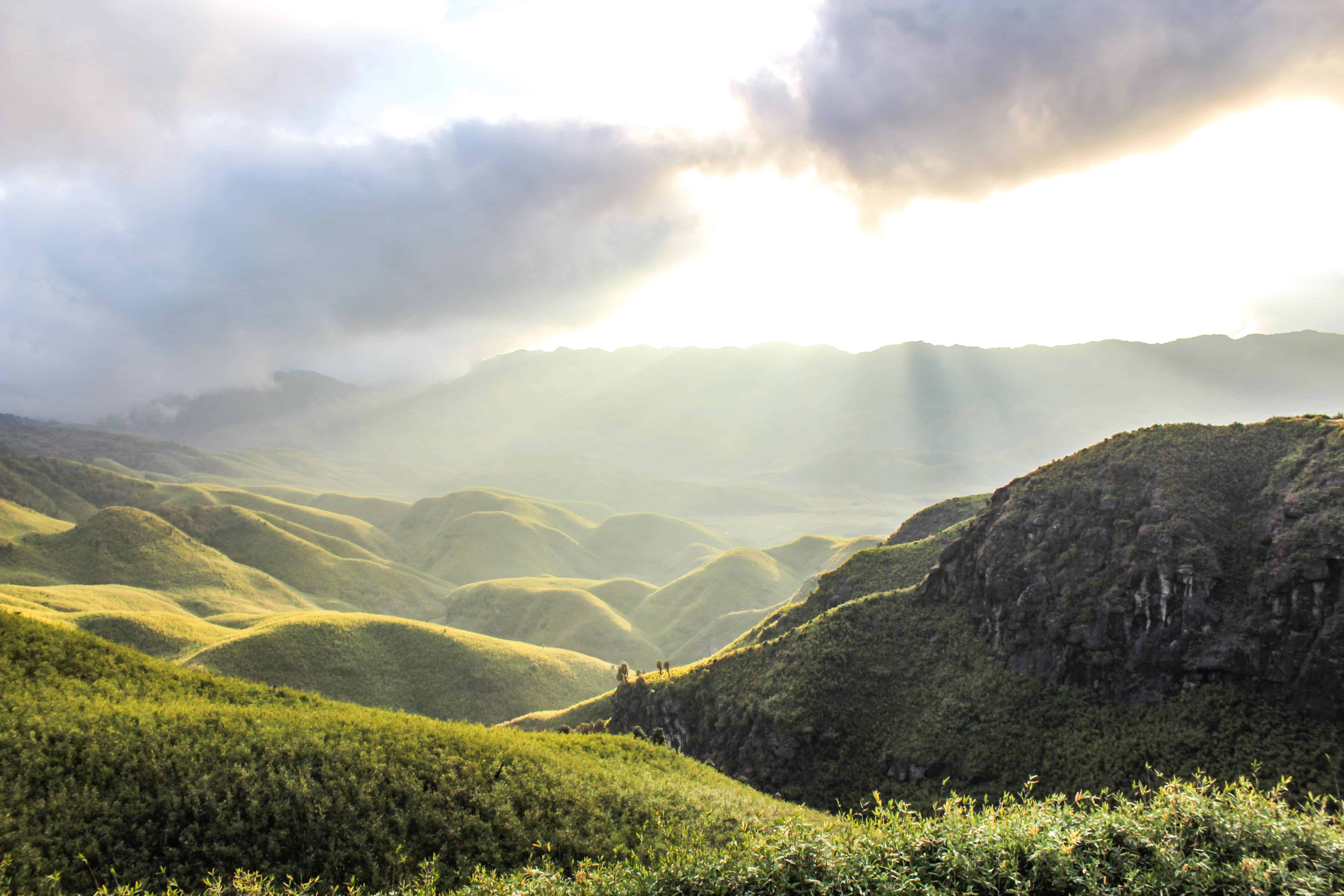 As I cast my eyes over the layers and layers of undulating emerald hills of Dzukou Valley, I was finally able to understand something I’d heard time and again by everyone who had visited this place. “Words cannot explain the mysterious aura of Dzukou Valley. You need to step foot there to experience it.”

Just one glance at the rolling velvet hills of the elusive Dzukou valley, and you will know why this is often called as North-East India’s favorite secret.

Dzukou Valley trek was the last leg of our Nagaland trip and I hadn’t gotten an opportunity to fulfill my sunset-at-every-place-I-visit wish yet.

The day of our Dzukou Valley trek dawned cloudy and murky despite the weather forecast stating otherwise. Yet, the excitement and prospect of watching a sunset from Dzukou Valley overrode all other feelings of dismay. I still kept my hopes high.

I was in Nagaland with a group of four other travelers. Friends I’d met, a few days earlier at Jorhat in Assam.

As is customary with every group trip, we didn’t really start our journey at the pre-decided time. Our initial plan of leaving at 7 am got overshot by two hours and by the time we bundled ourselves and our respective bags into our cab, the sun was well up in the sky, obscured though it was by the stubborn clouds. The drive started from our camp in Jakhama (Hillfoot Camps) towards Visvema village, from where our trek to Dzukou Valley was supposed to start.

We had decided to take the easier approach, from Visvema as compared to the longer and steeper route of Jakhama. And so our cab chugged up the rugged path. The valley of Jakhama playing hide and seek with the sweeping clouds as we started gaining height.

Around half an hour later, we were dropped at the last motor able point along the way, and we began our hike.

SAYO stands for Southern Angami Youth Organization, currently managing Dzukou Valley and the guesthouse around the base.

We were six of us together including our driver who had decided to accompany us to Dzukou Valley. Our cab was taken down by the camp manager at Jakhama who was to meet us again after our trek.

The initial path curves steeply upwards amidst a thick jungle. We stopped from time to time to rest and to munch on peppermints and bundis, tiny round yellow balls of sweets.

Valley with a Soul

After around an hour and a half of uphill climb involving a lot of puffing and panting we reached a small cabin hut. Here the first part of the trail ended and the landscape changed abruptly.

Spread in front of us were layers and layers of gently rolling hills, a meandering stream, and wisps of cotton clouds gently floating around- Dzukou Valley! Absolutely magical.

We wanted to immediately start walking ahead but our grumbling stomach didn’t let us.

Inside the hut, I perched myself on a ledge and sat leaning against the wall of the hut. We had our lunch out of the parcels we had bought from Jakhama. How delicious they tasted! The mist swayed and swished outside and we shivered despite our jackets. Blissfully unaware of just how cold it was to get as the day progressed.

As for the sun, it seemed to have gone on a holiday behind the clouds.Just as we finished our lunch, the mist slowly started lifting and so did my hopes of watching the sunset at Dzukou Valley.

I quickly gobbled up my lunch, sprang up from my seat and scrambled towards a vantage point above the hut so as to capture at least one picture of this gorgeous marvel before it got shrouded in mist again.

We then quickly stuffed our empty lunch parcels into our bag (which we were to dispose of in the rest house ahead, so as to not litter) and resumed our hike.

Of Stories, Myths and Ancient Trails

Dzukou Valley is replete with myths and legends. It looks and sounds as mysterious as its stories. There are uncountable stories ranging from ghosts to spirits to the existence of a white elephant. According to some legends, it’s a place where the dead rest before departing! That’s why it’s named ‘Dzu-ko’, meaning soulless.

It’s also said that the water of this brook, which has branched itself throughout the valley, has healing properties.

I walked ahead of everyone so as to get unobstructed pictures of the valley. We were to spend the night in the only guest house/ dormitory at the Valley. It was around 3 km from the cabin hut.  And although it wasn’t as cloudy as it had been when we started the trek, it wasn’t showing any signs of clearing up completely for a sunset either.

We were walking at a slow pace and after around two hours of walking I gave up on my dream of watching a sunset and resigned myself to enjoying the journey. The sun always sets faster in the Northeast and it gets almost completely dark by 5 pm. By 3 pm we had completed nearly 3/4th of the trek and were taking our own sweet time to complete it.

Just as if the Universe heard my thoughts the clouds began to shift again revealing tiny beams of sunlight here and there. The sunset was due to happen at around 4pm. I couldn’t believe my luck! At the pace with which we were moving, there was no way I’d be able to reach the top before the sun disappeared behind the hills.

I debated with myself whether or not to make a dash for it or just hope to catch the sunset along the way. But there wasn’t a clear view of the sun from where we were walking. It was obstructed by the layers of hill filled with vegetation; Dense foliage obscuring the view and the sun was perched somewhere behind the layers of hills.

My Mini Race Against Time

Fortunately for me, my mind agreed with the former idea and after informing my friends I darted ahead.

I ran along the narrow path stumbling over the unobstructive stones pushing away the bamboo shoots with my elbow. My left palm was clasped protectively around the mouth of the camera lens.

At places the path seemed to have submerged in the thick canopy of the low lying bamboo shoots.

I tried not to get distracted by the play of sunshine and shadows over the stunning green molds. Failed miserably all the time and ended up pressing the shutter button every 100 meters.

When our destination, the Dzukou Valley Rest House appeared quite near, I slowed down my pace to catch my breath. Apart from the occasional sound of distant voices of my friends carried by the wind, there was not a sound to be heard.

It was deathly quiet. There’s certainly a mysterious aura about Dzukou Valley which is both enchanting and eerie at the same time.

The trees here are leafless due to a forest fire which destroyed them and they never grown leafs since then. These strange looking trees are one of the main reasons for the existence of all the stories and legends.

Suddenly the dense foliage opened up and along with it a huge cloud swooped in, temporarily plunging the valley in shadow. And In a rush of adrenaline I sprinted the rest of the way.

I arrived panting and puffing, clutching the camera strap dangling around my neck and took in my surroundings. The landscape had transformed and the clouds slowly seemed to be swimming to the other side.

The dark green molds of hills slowly changed to golden yellow tinged with light green. There was not a soul there apart from two cute puppies. Dzukou valley lived up to its name. It was everything and more than what I had in mind.

An unobstructed view of the emerald molds now turned orange yellow as far as the eye could. There was a gentle breeze blowing and the tiny bamboo shoots in front of me shuddered and swayed. And then there was silence. The kind of silence which embraces you in a warm bliss.

Dzukou Valley Sunset- An Experience of a Lifetime

As I watched, a huge shaft of light gushed out from an opening through the clouds it was almost as if a spaceship would land any moment now. The valley was flooded with a golden glow. Illuminating the hillocks and turning them into vivid green emerald molds. It looked so surreal. I kept gazing transfixed.

A feeling of exhilaration washed over me. As I stood there alone, far from everything and everyone I knew sharing a beautiful stolen moment of solitude with my Universe.

They say there are some moments in life when you feel as if you’ve lived an eternity. When everything seems to stand still and it’s just you and the feeling of ecstasy. It certainly was one of those moments for me.

I hope some of these pictures do justice to it although it’s nowhere close to how it was in reality. I teared up while watching this magical, magical phenomenon. Simultaneously grinning foolishly with the sheer joy of being able to experience something so divine.

With every minute closer to sunset, the landscape took on a different shade of orange and slowly shifted to more pinkish yellow tones

Sounds of scrambling feet made me turn back, breaking my reverie. My friends had arrived and all of us stood there, drinking in the gorgeous phenomena unfolding before us.

As I stood looking towards the mystical play of sunshine and shadow, only one thought kept swirling in my head. Here was something that I’d longed and imagined and it unfolded almost exactly in the way I’d visualized it in my head. I had longed to trek solo to Dzukou Valley, but for the obvious reasons I had decided against it, at least not as a first attempt. My Universe made that possible for me in a different way though. It was almost a solo trek but without the heightened sense of alertness which would have otherwise accompanied me had I decided to trek solo. Here I was able to let down my guard and completely be in the moment.

Strange though it was, the clouds which I’d earlier cursed at, turned out to be the reason behind this surreal spectacle! Just how strange are the ways of the Universe and how they change within a span of seconds…

It’s almost as if I get small doses of reality checks every time I begin to think negatively. Different silver linings in different forms.

It was very bright and sunny.

After around 2 hours of exploration, we hiked back, had cup noodles and started our trek back to Jakhama Campsite.

As we trekked back, the previous day’s events were constantly playing in my head. I kept thanking myself for deciding to run those last miles.

Had I not decided to run, I wouldn’t have missed the sunset of course, since my friends joined me later and all of us were lucky enough to be able to witness a wonder beyond our imagination.

But I definitely would’ve lost those precious 15-20 minutes that I had all to myself. Those precious moments of solitude are the ones which I shall cherish forever. I got to witness my sunset and also got an opportunity to fulfil my wish of wanting to trek alone along that bamboo replete path.

Some things are definitely worth chasing. Even if you feel like there may not be a chance of finding anything extraordinary at the end. Every small ounce of happiness is worth celebrating. For at the end of the day moments like these, with little bouts of joy, are all that matter.

As they say, “live for the moments that take your breath away”, this was definitely one of those moments…