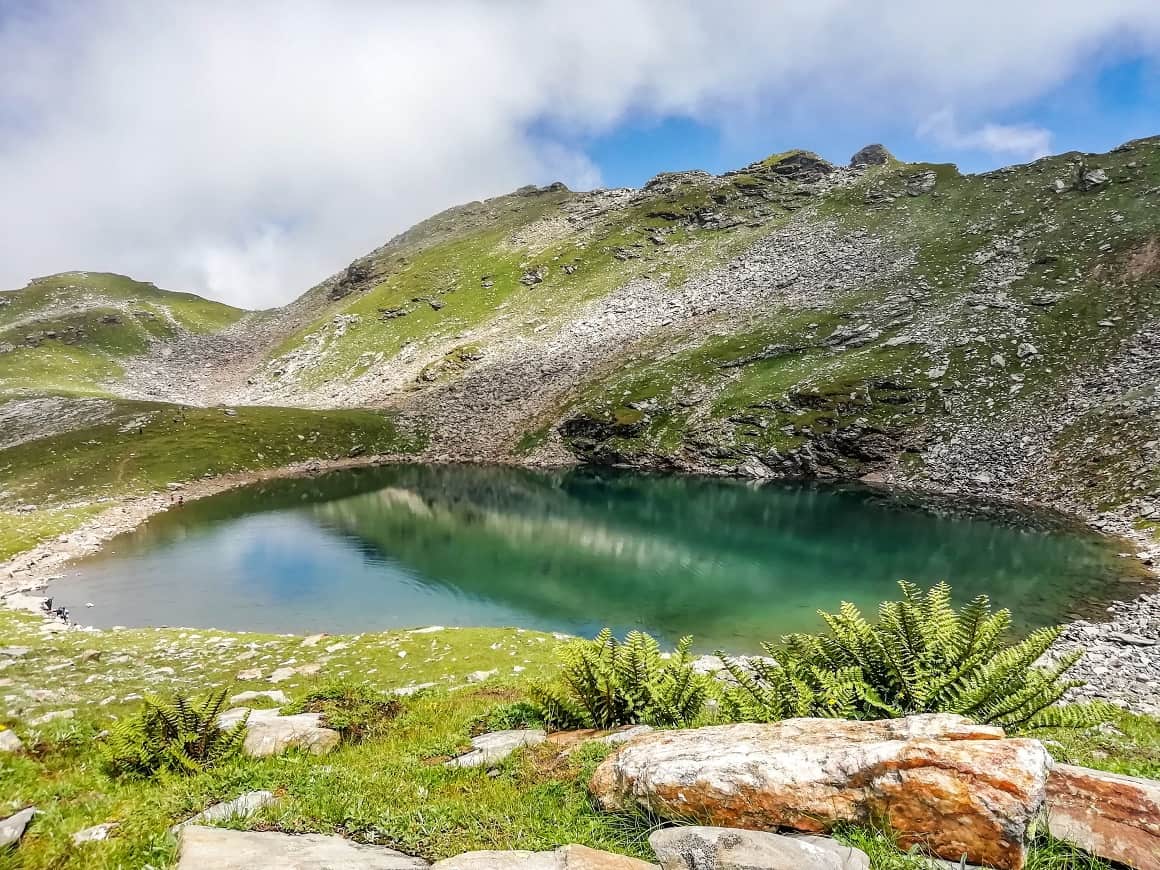 Most people do the Bhrigu Lake trek for the alpine blue lake doused in mythological tales.

Bhrigu Lake trek however has more than just that to offer. The sweeping green meadows cluttered with little wildflowers, breathtaking views of the Himalayas with their head in the snow, and the beautiful campsite of Rola Kholi and a quiet uncrowded trail as compared to other popular treks. This trek can be done independently as the trail is pretty well laid. But it’s recommended to hire a local guide.

I did this trek with Indiahikes.

The journey to Bhrigu Lake starts from Manali. After around an hour-long drive along the scenic and winding Manali-Rohtang Pass road (an hour provided there’s no traffic) we reached Gulaba. Gulaba is the first access point, from where trekkers begin their trek to Bhrigu Lake. The route is beautiful with the huge brown mountains on one side and the Beas River flowing at their feet.

We reached Gulaba a few hours before sunset and there was a soft yellow light cast over the valley. The sun peeked from in between the mountains and just before completely dipping behind the dark giants, it splashed the valley with an enchanting orange and yellow hue.

We started our trek after the briefing. The initial path was along the Rohtang- Manali road. I’d tucked my camera in my backpack, convinced that I wouldn’t need it since it was fag end of the day. Also because I wanted to save my energy on the first day and not tire out by constantly crouching and kneeling. Something that’s always bound to happen, if I keep my camera dangled around my neck.

But of course, there was a beautiful sunset and I had to make do with a phone photo.

After puffing and panting up the steep path laden with boulders and bushes, nettle herbs we reached our first campsite, Jonker Thatch. The sky had turned pretty dark with little patches of orange at the horizon where the sun had set.

The campsite was at the edge of a forest and through the trees, we could make out the dark green meadows beyond, steadily inclining upwards.

We were all tired and so decided to call it a night after the dinner.

The carpet of green on the Bhrigu Lake trek littered with birch and cedar forest.

After an early breakfast we set off towards Rola Kholi, the second campsite of Bhrigu Lake trek.

This day mostly comprised of meadows and more meadows with the beautiful backdrop of the Pir Panjal and Dhauladhar ranges majestically looking over the valley. These velvet meadows, sometimes emerald green with yellow hues, sometimes a light shade of jade, accompanied us right till the Bhrigu Lake.

Can one ever get tired of gazing at these celestial beauties? Is there anything more gratifying than a soulful time spent in their company? Despite all the difficulties involved in climbing up,more than once I found myself walking backward, facing the mountains. I just couldn’t have enough of these divine beauties!

We reached our second campsite Rola Kholi around mid-afternoon and the sun was beating down our backs! within an hour though, the entire landscape was engulfed in thick shields of mist! the unpredictable mountain weather! Rola Kholi was a scenic campsite, a grazing ground rather. Almost like a small valley. The Chor Nallah stream, the main water source for the campsite, flows across it separating it from the meadows beyond.

I’m often asked, as to why I bother with all the strenuous climb, the physical pain, and difficulties just for a few minutes of pleasure at the summit. But then that’s the point. It’s not just about a few minutes of pleasure. There’s seldom an easy answer. Unless you embark on a trek and find out for yourself, of the joy that’s trekking, you’ll never really be able to understand the reason. The sheer joy of being so close to raw nature!

A trek is a journey in itself. A journey of self-discovery, a journey filled with trials and tribulations, much like the journey of life itself. the success of a trek does not lie in the summit one manages to conquer or the final destination. It’s a steady act of placing one foot in front of another and finishing the sojourn at one’s own pace.

Very often I come across trekkers who crib and cry that they wouldn’t ever do any other trek in their lifetime again but even the ones who found it the most difficult, end up planning another one towards the end.

We started early today since we had to reach the summit and climb back down the same route. After an initial gradual ascent involving many rest stops, there was a final steep ascent. Here we had to maneuver around some boulders which were comparatively difficult

The trail was scattered with cairns of all sizes. Cairns refers to the stack of stones and rocks piled one on top of another with the widest stone forming the base layer topped with a small stone. It mostly consists of flat stones of all sizes. The use of cairns dates back to ancient times. One of its main purposes was to guide hikers by helping in marking the trail.

After a few more steps, we were on a ridge overlooking the blue glacial lake. It was a gorgeous sight. The quote “difficult roads often lead to beautiful destinations” made complete sense when I finally caught the first glimpse of Bhrigu Lake

I ran ahead so as to get few shots of the lake bereft of any humans.

I spotted some yellow flowers in the distance and after removing my shoes near some rocks I sprinted ahead. Our guide told us that it was against their religious beliefs to wear shoes around the lake’s periphery and I didn’t want to hurt them. Not really sprinted since I realized soon enough that the ground wasn’t really as smooth as it looked from afar!

It was an easy descent on this day and we walked down at our own pace, drinking in the views, through the vast meadows which seemed even more beautiful today since the descent wasn’t strenuous.

Throughout the entirety of the trek, the weather gods seemed to have been in our favor. But on this day the weather was especially beautiful. As if the place was gifting us a beautiful farewell gift.

There were plenty of rest stops today and all of us took plenty of pictures and had fun together. It took us around 3-4 hours to reach Gulaba.

How to reach Bhrigu Lake

One of the main reasons to do the Bhrigu Lake trek would be its close proximity to Manali. Although it took some time for this trek to catch the attention of the masses, it is now considered to be the best alternative to the popular but now commercialized Hampta Pass trek.

How to do Bhrigu Lake Trek

Nowadays owing to the excess popularity and commercialization of the famous Hampta Pass trek, many are looking for better and secluded alternatives along with all the other features that come with a beautiful trek. Bhrigu Lake trek fits all the bills.

There are many trekking organizations running this trek now, with Indiahikes being the most popular. I’d recommend HippieinHills though. Its team consists of a bunch of fun people who are locals and also very adept and efficient in their job.

I wouldn’t call categorize this as a very difficult trek, barring out the summit day. The summit day includes maneuvering around some rocks and boulders along an uphill trail and is slightly difficult as compared to other days. Other days involve a gradual ascent and hence Bhrigu lake can be a moderate level trek which first-time trekkers can attempt.

The best time to do the Bhrigu Lake trek would be from June to October. June would be an ideal month for the trail would be littered with different varieties of wildflowers. September and October would see less crowd. During our trek in September, we had the entire trail to ourselves on all the days!

Liked this post? You could consider subscribing! 😉 And get more stories like this, directly to your mail.

3 thoughts on “Bhrigu Lake, A Stunning Jewel in Himachal Pradesh”